Former President, Olusegun Obasanjo, has warned against handing over Nigeria’s democracy to persons he described as “thieves and hooligans”.

He made the comment on Tuesday in Abuja at the launch of ‘My Transition Hours’, a book written by former President Goodluck Jonathan.

Obasanjo said democracy should be in the hands of democrats but stated that thieves and hooligans can use it is a “dangerous weapon” against the state.

“It unifies rather than divide if democracy is found as an instrument in the hands of democrats. If it is in the hands of those, I call thieves, hooligans in politics, it can be a dangerous weapon,” he said.

“So, we must avoid hooligans to have access to this beautiful weapon because they might abuse and misuse it.”

The former president also outlined what he described as the four seasons in the life of a democratic politician.

“The first is when you start campaigning and go round to seek for votes, then the election comes and you win.

“The second season is when you take up office and all is going well, then suddenly there is ups and down, of course you came in with high popularity that’s why you are able to win election, but as you go on the popularity start to dwindle, until either you come to the expiration of your time or you lose election.

“Now the beginning of the third season, it does not matter who you are, immediately you leave office you will have lost friends, particularly the fairweather friends, and that is a very tight period for anybody who has been elected before.

“Then the fourth is when you weather the storm until you start to pick up again.” 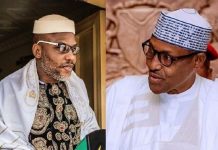